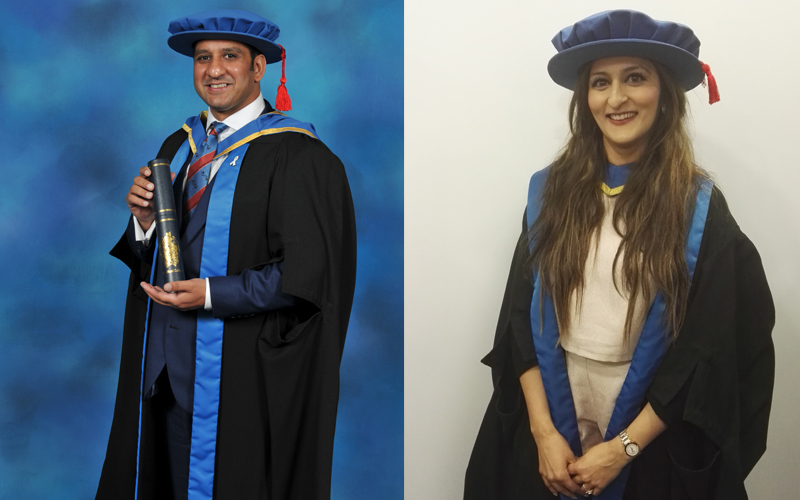 Two of Yorkshire’s most influential sports people, who continue to break down barriers on and off the rugby field, have been awarded with Honorary Fellowships from Bradford College.

Ikram Butt, the first British Asian Muslim to represent England at either code of rugby, and Saima Hussain, the first Muslim female to play rugby league for England, received their awards on Tuesday 22nd November during the annual graduation ceremonies.

Ikram, who since retiring from the sport of rugby has worked tirelessly on several community, national and international projects, said it was an honour to be selected by the college.

“I got a letter from the college asking me if I would be willing to accept the award and it just took me by surprise really because I had no inclination that anything like this was going to happen to me,” he said.

“The day itself was a fantastic occasion and a most memorable one too. The College is leading the way in so many ways, including inclusivity, and it was an honour to receive the fellowship.”

Ikram played rugby league for Leeds, Featherstone, Huddersfield, Hunslet and London Broncos and was capped for England during his playing days.

After hanging up his boots for the professional sides, he helped establish the British Asian Rugby Association (BARA) which aims to provide positive role models, break down cultural and religious barriers and promote community cohesion.

Among the other good causes he champions are the White Ribbon Campaign, Kick It out, British Asian Trust, Wooden Spoon, Mosaic and the Pakistan Recovery Fund.

Speaking about the gratitude and privilege of receiving such an award from the college, Ikram paid tribute to all those who he continues to work with on a day-to-day basis.

“When I spoke at the ceremony, I told those in attendance about the importance of working hard, of respecting each other’s values, regardless of who you are or what your background is,” he said.

“We all have choices, it’s just about making the right ones.”

Ikram was joined by fellow rugby star, Saima, on stage.

After breaking ground for Muslim women in the sport of rugby league, playing for both Yorkshire and England, Saima has helped smash preconceptions about race and gender and encourages positive attitudes towards sport by sharing her own story.

She is committed to raising the profile of women’s rugby league and has worked tirelessly to encourage women to become involved in the sport.

She now works in sports development in Bradford, encouraging young people from all backgrounds to get involved in sport.

On accepting her award, she paid tribute to all the girls playing rugby across Bradford.

She said: “It did come as a surprise when I found out about the Fellowship but it has made me really motivated to produce the next talent within Bradford.

“In terms of the work I’ve done in sports development, most of my past success has been in Leeds where we have identified a lot of the gifted and talented.

“I have only been in Bradford for two years, and the first year is really about identifying what needs to be improved and where. After working with Laisterdyke College and Carlton Bolling, I know these girls have all the potential. This fellowship is as much about the girls as it is about me.”

“We are delighted to confer honorary fellowships on such a distinguished group of people,” he said.

“They have all excelled in their own field and are wonderful role models for our students and staff and we look forward to the contribution they will make to the College.

“We are very proud of all our graduates and wish them every success in their future studies and careers. They are our ambassadors and we look forward to celebrating their invaluable contributions to the continued development of Bradford, the region and communities overseas.”