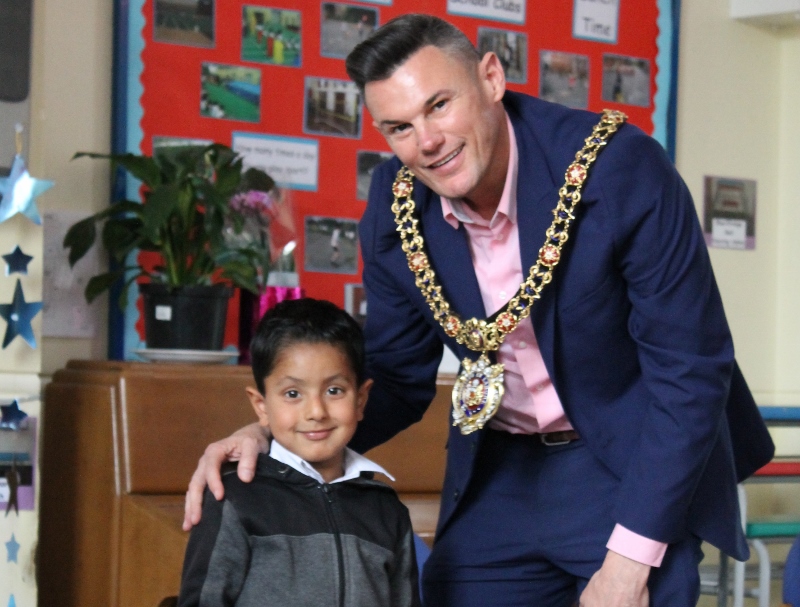 Children from a Crowcroft Park Primary School have had a special visit from Manchester’s Lord Mayor to congratulate them on their achievements.

The pupils from the Longsight primary school welcomed the Lord Mayor of Manchester, Cllr Carl Austin-Behan to a special assembly for improved writers on Monday 27th June.

During the assembly, the Lord Mayor presented the youngsters with special prizes to celebrate their achievements.

Crowcroft Park Primary school has been nationally recognised for its exceptional performance in 2015 by the Schools, Students and Teachers network (SSAT).

Students at the school have made significant progress in reading, writing and maths – with the school performing among the top 10 per cent of schools in the country.

Lord Mayor of Manchester, Cllr Carl Austin-Behan said: “It was a pleasure to visit the school to meet with so many talented youngsters and reward them for their achievements.

“The enthusiastic staff are doing a magnificent job encouraging the children to work hard at their studies. Improving literacy matters for the future of our young people and also helps to create highly literate workforces and communities for the benefit of the city.”

Sue Williamson, Chief Executive of SSAT said: “It’s my great pleasure to commend on their excellent 2015 performance, and to have the opportunity to highlight Crowcroft Park Primary school and share their great work at the SSAT Educational Outcomes celebration event.”

She continued: “I have the privilege of visiting a lot of schools and I am always impressed by the creativity of teachers in engaging and inspiring their students.

Bradford kids get a foot up with Futsal style football sessions