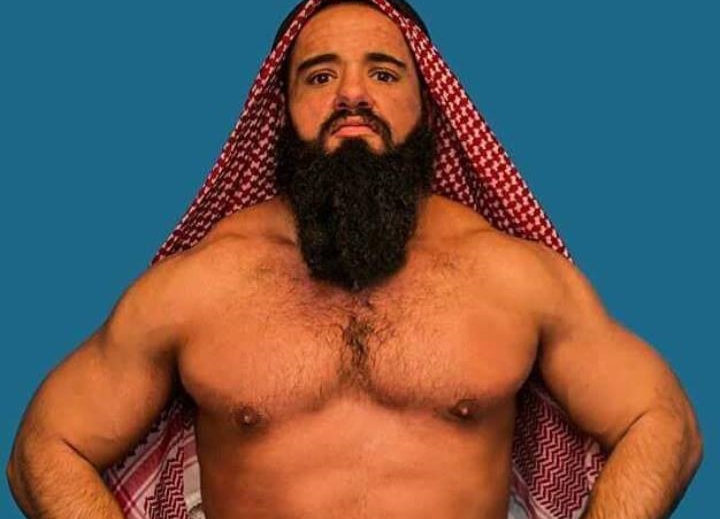 An Asian wrestler, who found himself at the centre of a racist dispute at a British holiday camp, has told the Asian Express he ‘would never represent his people as terrorists’.

Hakeem Waqur, from Germany, has been wrestling for five years, appearing in matches all around the world without complaint.

However, during a routine performance at Butlins in Skegness earlier this year, Hakeem found his picture plastered across international news sources as ‘the wrestler portraying Muslims in a negative light’.

Playing the part of the ‘bad guy’ (known as a ‘heel’) on the night, he came down to the ring waving the Saudi Arabian flag as the crowd were urged to boo him and cheer ultra-Brit – Tony Spitfire.

With one disgruntled fan comparing the moment to a Britain First rally, Hakeem has now labelled the situation as ‘overhyped’ and has no regrets for his role.

“My message as an athlete is loud and clear – to call for peace in the Middle East and also to entertain the fans,” he said.

“Even if I am the bad guy in the ring I will never ever represent my people as terrorists. It’s not going to happen.”

He added: “There are many European and American athletes who carry the flags of their countries in other sports and nobody says a thing.

“There are also European and American wrestlers who are ‘bad guys’ in the ring, but nobody says they are ‘Christian baddies’ or that they represent their nation in a bad light.”

Hakeem grew up watching the likes of Hulk Hogan, Shawn Michaels and Razor Ramone in the WWE, with several athletes in the profession carrying flags to the ring.

The 32-year-old insists his persona – ‘The Arabian Superstar’ – is not a stereotype and added that he has worked hard to achieve his successes in the hard-hitting industry.

“Being an Arab ‘bad guy’ in the ring has nothing to do with religion or politics,” he said.

Despite seeing some of his summer shows cancelled this year in UK camps, Hakeem remains committed to the sport he is passionate about.

He has received support messages from a number of countries and certainly has no desire to give up competing any time soon.

“I was told a few weeks ago that the decision had been made that the summer shows will focus on British wrestlers and a few Europeans, whilst there wouldn’t be space for the world riot squads,” he added.

“For now, I will continue to work hard at making a name for the Arab world, the Muslim world, the Middle-East and for myself in sport.

“I don’t care what the minority of people think or the media. I just care about my nation and fans who support me and about myself.”