Increasing average temperatures are a worry

The impacts of climate change are already being felt in the UK and urgent action is needed, concludes a report published this week.

In an independent report to Government, ‘UK Climate Change Risk Assessment Evidence Report’, the Committee on Climate Change’s Adaptation Sub-Committee (ASC) sets out the most urgent risks and opportunities arising for the UK from climate change.

The report is the result of more than three years of work involving hundreds of leading scientists – including researchers from the University of Leeds – and experts from the public and private sectors.

Professor Andy Challinor from the Priestley International Centre for Climate at the University of Leeds wrote one of the chapters of the report.

He said: “Food production shocks triggered by droughts and heatwaves emerged as an important risk. Shocks from around the globe can influence the UK through food price spikes.”

He continued: “On the plus side, we found that it’s possible to make choices about what we eat that benefit both our health and the health of the planet.”

Changes to the UK climate are likely to include periods of too much or too little water, increasing average and extreme temperatures, and rising sea levels.

The report concludes that the most urgent risks for the UK resulting from these changes are flooding and coastal change risks to communities, businesses and infrastructure; risks to health, wellbeing and productivity from high temperatures and risk of shortages in the public water supply, including water for agriculture, energy generation and industry – with impacts on freshwater ecology.

Other problems include risks to terrestrial, coastal, marine and freshwater ecosystems, soils and biodiversity; risks to domestic and international food production and trade and risks of new and emerging pests and diseases, and invasive non-native species, affecting people, plants and animals.

Professor Piers Forster, Director of the Priestley International Centre for Climate at the University of Leeds, who was not involved in the study, said: “The UK gets off lighter than many countries but this important report confirms that we are already seeing damage to homes, businesses and livelihoods.” 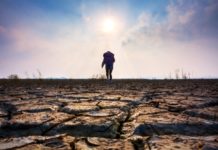