In the annual chart compiled by consultancy firm Mercer, Hong Kong is the world’s most expensive city for expats, pipping Angolan capital Luanda to the number one spot.

Luanda’s local currency has weakened which is why it fell in the ranking this year.

Zurich and Singapore were third and fourth on the list, unchanged from a year ago. Tokyo rose to fifth.

The survey is designed for companies to calculate expat workers’ allowances.

It weighs up the cost of living in 209 cities across the world, comparing the cost of more than 200 items in each location, including housing, transport, food, clothing and entertainment.

In Hong Kong, the world’s most expensive city, it will cost $12,077 US dollars to rent a 3-bedroom house over a year, a whopping $7.8 for a cup of coffee and nearly $5 for a hamburger meal.

In the UK, London dropped five places to 17th, Aberdeen fell seven places to 85th and Birmingham, in 96th, dropped by 16 places. Further down the list, Glasgow dropped 10 places to 119th and Belfast was down three places to 134th.

A survey earlier this year, by the Economist Intelligence Unit (EIU), ranked Singapore as the priciest city in the world ahead of Zurich, Hong Kong, Geneva and Paris. 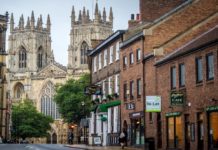