A man who subjected a woman to an incredibly vicious sexual assault before leaving her for dead has been given a life sentence.

Singh left the victim with multiple serious injuries which were so horrific she spent a ‘considerable’ time in hospital recovering, Leicestershire Police said.

On the night of Friday 5th June last year, the maniac carried out the attack on the premises where the girl was working alone, in King Street, Leicester City Centre.

He lured the 22-year-old victim over to him by claiming his machine was broken.

The court heard how he forced her into a staff toilet where he carried out a sickening 20-minute assault which left her with severe internal injuries.

Prosecutor Andy Easteal told Stafford crown court that when police arrived, the victim was covered in so much blood that they could not even tell she was a woman.

He said: “Her lungs were damaged, her nose was broken and her cheekbone and neck were fractured.”

Judge Michael Chambers QC recommended he serve a minimum of 14 years before the parole board can begin to consider whether it would be safe to release him on a life licence.

He will remain on the sex offender register for life.

Cousin Balbir Singh was convicted of helping him evade arrest and got two years’ jail after helping Vijay Singh home, giving him a change of clothes and hiding his bloodied clothing inside a shed.

After the hearing on 17th June, Detective Sergeant Sarah Walker, the investigating officer, said: “The victim has shown immense bravery and courage throughout the investigation.

“It was an incredibly distressing experience for her and she has had to relive the attack in order to assist officers to piece together the events of that night and ultimately bring those responsible to justice.”

Rising attacks on betting shop workers have led to calls by MPs for an end to single staffing.

Support for victims of sexual violence in Leicester, Leicestershire and Rutland is available from United Against Violence and Abuse on 0808 802 0028. 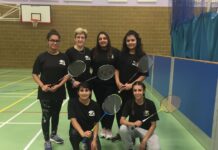