Home News “I’m dependent on people going out and donating blood so I can... 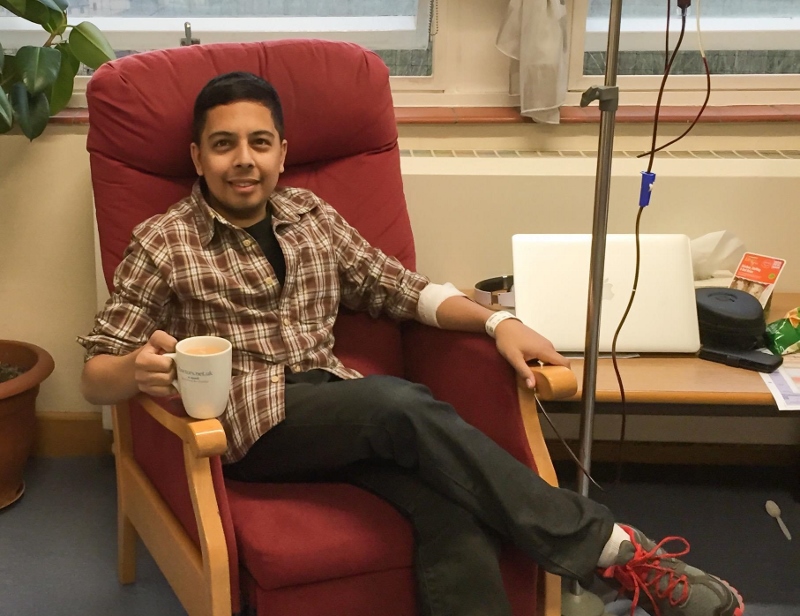 Asian man who was diagnosed with blood disorder when he was just a baby, has stepped forward and taken part in a new campaign to help recruit new blood donors

Amit Ghelani, a 30-year-old man living with Beta Thalassaemia Major, who needs blood transfusions every few weeks, is at the heart of a new advertising campaign to highlight the life-saving power of blood donation.

He features in NHS Blood and Transplant’s new outdoor advertising campaign which enables members of the public to give a virtual blood donation and see the life-saving transformation of patients before their eyes.

Amit from Wembley, is one of three people whose lives have been saved by blood transfusions who is taking part in the campaign. He hopes to encourage people who have never given blood before to register to donate blood for the first time.

Amit was diagnosed with Beta Thalassaemia Major at 18-months-old, and requires blood transfusions every three weeks, with each transfusion taking six hours.

He says: “I’m really delighted to be taking part in this campaign to encourage people to sign up as blood donors.

“I’m dependent on people going out and donating blood so I can live.

“Giving blood is so selfless – you don’t know who it’s for, where it’s going or why they’ll need it, but you know that giving up and hour of your time and donating is so powerful. I wouldn’t be here without blood donors.”

The campaign uses an augmented reality app which connects to a large advertising screen featuring an empty blood bag and ill patient. Visual recognition is used to detect a sticker on the recipient’s skin which then overlays a plaster, needle and tube over their arm.

NHS Blood and Transplant needs to collect 1.6 million units of blood each year to meet the needs of patients across England and faces a constant challenge to recruit the right mix of donors across all the various blood groups.

People requiring regular blood transfusions need blood from donors with a similar ethnic background to provide the best match and better outcomes in the long term. Only two per cent of people who have given blood in England in the last 12 months come from South Asian or mixed race communities.

NHS Blood and Transplant needs just under 200,000 new donors to register to give blood this year. They will replace those are no longer able to donate, those who can’t donate temporarily due to travel or other short term restrictions and also help ensure we have the right mix of blood groups to meet future patient needs.

In general, as long as you are fit and healthy, weigh over 7 stone 12 lbs (50kg) and are aged between 17 and 66 (up to 70 if you have given blood before) you should be able to give blood. If you are over 70, you need to have given blood in the last two years to continue donating.