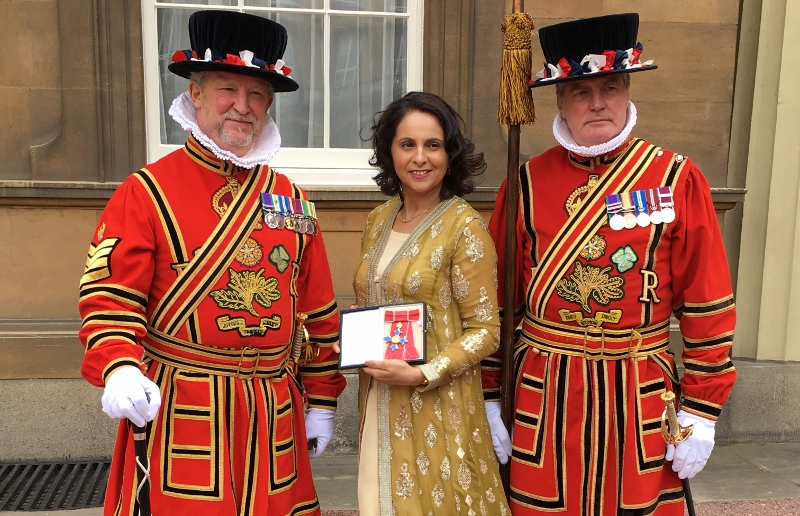 On 20th May, on a gloriously sunny day at Buckingham Palace, HRH Prince Charles handed British Muslim Adeeba Malik the honorary title of CBE and asked her: “Are you back again?”

Ten years ago, former school teacher and leading voice for the socially disadvantaged in Bradford, Adeeba had already shook the hand of the future King when she received her MBE in June 2004 for her contribution to mainstream public bodies.

The Commander of the Order of the British Empire (CBE) is awarded for having a distinguished, innovative contribution in a prominent role at national level, or a leading role at regional level.

Humble and self-effacing as ever, Adeeba said: “The award isn’t just about me. It means a lot of things to a lot of different people.”

She recalled: “It was an amazing experience because, for one, the sun was shining.

“I wasn’t that nervous about meeting Prince Charles, he’s a top man. I was more worried about my dress. It was quite long and I was scared my heel would get caught in it.”

Through her work as Deputy CEO of the ethnic minority-led charity, QED, Adeeba has managed to help grow the organisation into the country’s leading ethnic minority-focused education, employment and training provider.

A true role model for many, Adeeba has held various ministerial and non-ministerial national appointments; including being a commissioner for the Women and Work Commission under the Blair government.

She noted that her work is something that she “really enjoys doing” and hopes to influence change in the future so that “everyone can have access to education, work and healthcare for a good quality of life”.

“My parents strongly believed in giving their children an education,” she said.

“I feel impassioned that everyone should have access to a good education and the opportunities to succeed.

“I fundamentally believe that if we can get the economic and social integration right in our communities then that will make a huge difference.”

Adeeba’s father passed away 14 years ago, but the inspirational Pakistani immigrant – who taught himself English under a street light before emigrating to Bradford in 1958 where he worked in the mills – was at the forefront of her mind as she walked up the red velvet carpet.

When asked what he would think of his daughter, who now holds a CBE, Adeeba revealed: “He probably wouldn’t say anything due to his quiet nature.”

When he died, Adeeba was clearing out his office and found a folder where all her press cuttings were carefully and lovingly kept.

“He’d been collecting them over the years,” she smiled. “I know that he’d be very proud of me.”

Adeeba took her nephew along to the event and told him afterwards: “If you want to be successful in life, it’s important that always keep your feet on the ground.

“Always be humble in everything you do, never think you’re better than anyone else and make sure you have good people around you.”