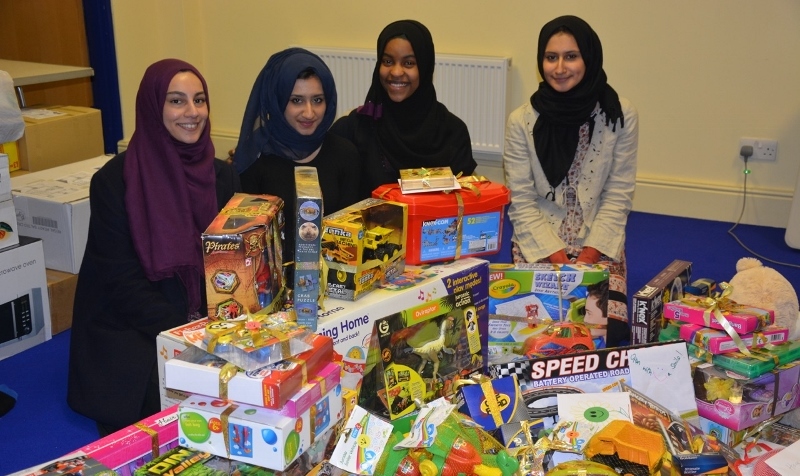 On Sunday 20th March, Muslims of all denominations from Leeds came together to carry out social action and perform good deeds for others in the local community.

The city’s Sadaqa Day team rounded up over 50 volunteers from a wide range of different communities, faiths and denominations to help strengthen community relations in Leeds.

This year food donations from local business, mosques and communities were collected, helping to create 125 food parcels for the poor and vulnerable, in conjunction with ‘PAFRAS’ – Positive Action for Refuges & Asylum Seekers.

In addition, 100 new toys were collected and motivational cards were made to give to vulnerable children in care in Leeds, thanks to Child Friendly Leeds.

Aisha Rashid – co-ordinator of Leeds Muslim Youth Forum – on behalf of the Sadaqa Day Leeds Team said:  “This year’s Sadaqa Day event was a huge success due to the partnership of Muslim organisations that brought it all together and we were humbled by the turn out of volunteers who joined us from other faith groups, making Sadaqa Day an incredible interfaith experience.

“We are confident that Sadaqa Day will be an annual event that will celebrate the numerous good works that are carried out by Muslims across Leeds”.

Qari Asim, Imam of Makkah Mosque Leeds, added: “Overall, it was a fantastic event, bringing together people of different ages and backgrounds; Muslims, Christians, Jews and people of no faith to help the poor and the vulnerable in our society.

“100 crates of food and 150 toys were donated. People poured out their hearts and were very generous with their money and time. They made an effort to help each other.

“People came together to do something for our own city and the people in it.

“We started a collection a week in advance. On the day we had 30 volunteers that delivered food parcels and toys to various charities.

“A stand out moment was the conversations that took place. People think that people of different faiths don’t get on, and that faith isn’t relevant to what our society needs, but faith has always been at the forefront of social action.

“Volunteers willingly came together to do something for their fellow human beings. It was in complete contrast to the carnage that happened in Brussels this week.”