Listen and do no harm

Dr Faraaz Bhatti, from Telford, is a medical doctor in Emergency Medicine. He works in a busy city Emergency Department.

Dr Bhatti has chosen The Asian Express to exclusively talk about the junior doctor strikes.

He said: “This is my quick analysis from the front line. I am a doctor in Emergency Medicine and like my colleagues I want a secure future for the best healthcare service in the world: the NHS.

“Let’s go to the very beginning of this dispute. There are over 50,000 junior doctors in England who have found themselves caught in the middle of cross-fire between the government and the British Medical Association.

“On one side, Jeremy Hunt has been trying his best to enforce his Party’s flawed agenda on a ‘7 day service’ by pushing a very unpopular contract on doctors.

“The BMA are backed by junior doctors throughout the country who feel passionate about an issue that has far-reaching consequences beyond what it may seem.

“After months of negotiation and re-negotiation, the government has opted to impose an unsafe contract which may send hundreds – if not thousands – of doctors flocking to the Southern Hemisphere.

“After years of very expensive training, the government is devaluing a workforce that has only one agenda: patient-centred care.

“My colleagues have maintained that they strike for the NHS and for better working conditions and many feel forced to leave a system encouraging low morale with other countries keen on capitalising on this.

“We are now seeing doctors demonstrating on an unprecedented scale for patient safety and fairness. Is it too much to ask?

“Do doctors want to strike? Not at all. Doctors would like the government to open its eyes, see common sense and start working for the public as elected.

“Unfair contracts which are unsafe, low morale and a leadership that isn’t listening to the country’s medical professionals is a certain way to harm, not improve, the health service.

“My message to the government: start listening to over 50,000 professionals who work all days and nights of the week with the public, for the public. Listen and do no harm.” 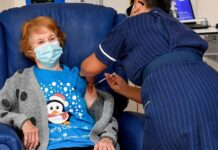 Junior doctor who made over 50,000 indecent images of children jailed

What a load of rubbish… Birmingham bin strike expected to resume...