Back in October 2001, father-of-three Masood Ahmed from Thornbury lost the use of his kidneys.

In 2007 he had a transplant, but sadly in July 2014 he suffered another heart attack.

He said: “For five to ten minutes I was like a dead man. My whole system shut down. I was taken to hospital and they put me on a ventilator machine.

“My life is far from normal. I stay alive from the dialysis I receive three times a week but it really wears me out. Sometimes I find it difficult to even walk around.”

Masood is provided with transport to and from St Luke’s Hospital but the stress of waiting for a kidney donor is taking its toll on his family.

Masood said: “My wife and family are very supportive. Thankfully my youngest is only five years old and doesn’t know what’s going on but my other children are 11 and 13, and they sometimes get very upset.”

Masood wants more people to sign up to the organ donor register.

“The kidneys have to be healthy, but in Asian communities there are problems with diabetes and heart attacks,” he continued. “Everyone on my mother’s side is diabetic.

“At the moment I’m off the transplant list because of my heart problem in July 2015. Surgeons put some stents in my heart so the hospital took me off the list.

“In March, they’re putting me back on the list and- fingers crossed- I will get a match. It’s especially hard to get a healthy kidney in the Asian community.”

Patients from such communities are more likely to need an organ transplant than the rest of the population as they are more prone to illnesses such as diabetes and hypertension, which may result in organ failure and the need for a transplant.

Masood says he is positive about his chances, even though he feels tired ‘all the time’ and had to leave his job working at a petrol station.

He said: “I am exhausted most days, especially when I come back from the dialysis machine. There is no power in my body. It’s only at the weekend that I can get some rest but then Monday comes round again and I’m back on the machine.”

On average, patients from BAME communities will wait for at least a year for a kidney transplant due to the lack of suitable organs.

Blood and tissue types need to match for a successful transplant and organs from people from the same ethnic background are more likely to be a close match. 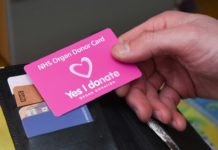