Monsters from Keighley finally locked up

Eleven men from Keighley have this week been sentenced to up to 20 years each behind bars after being found guilty of repeatedly raping a teenage girl between 2011 and 2012.

Over a period of 13 months, the men sexually exploited the then 13-year-old, in locations including a graveyard and underground car park.

The victim was described at Bradford Crown Court as leading a ‘chaotic existence’ at the time, and had been reported missing from home on more than 70 occasions over a two-year period.

Upon sentencing the men, Recorder of Bradford Judge, Roger Thomas, said all had been ‘heartless and demeaning’ and that the girl ‘clearly demanded pity and understanding’.

The teenager was repeatedly raped in encounters arranged by a violent drug dealer, Arif Choudhry, who was described as the ‘evil mastermind’ of the group.

Choudhury, now 18 and formerly of Victoria Avenue, Keighley, was accused by the girl of raping her in the grounds of a Keighley church when she was 13 after she refused to sell his drugs.

On one horrifying occasion, the girl was gang-raped by five of the defendants.

The men, who include three sets of brothers, were mostly young, low-level criminals living in Keighley.

However, one was a taxi driver who was 46 years older than the girl, who had sex with her in his cab when he picked her up as a fare. Another was a paedophile with a long history of sexual offending, whose nephew was in her class at school.

Ranging in age from 19 to 63, the men abused the girl at different places around the former mill town near Bradford.

The judge admonished the gang of men regularly throughout the trial, as they behaved so badly in the dock.

Mr Justice Thomas, QC – as he passed the sentence on Monday – said: “The attitudes that the majority of you have so clearly demonstrated to these proceedings have been contemptuous, disrespectful and arrogant on a scale that I have hardly seen before in many years of practice in criminal law.

“Exactly the same as your attitude to the 13- to 14-year-old girl who you all sexually abused and exploited for your own selfish gratification.”

Some of the men treated the case as a joke from start to finish. They smiled in the police mugshots taken after their arrests, fooled around in the dock, and laughed and waved as they were sent to prison to begin their sentences.

Despite a number having sent the victim explicit Facebook messages, most of the men lied about knowing the girl.

In a victim impact statement read to the court, the girl said the rapes had led to her being diagnosed with clinical depression and post-traumatic stress disorder.

Her statement read: “My impression of what a normal relationship would entail is mixed up and warped. I always thought I would grow up and do my exams and go into nursing. This has become more of a fairytale than the reality for me, which hurts.”

The sentences add up more than 149 years in total.

After the case, Detective Chief Inspector Nicola Bryar, of the Homicide and Major Enquiry Team, said: “We are pleased that these men have now been sentenced for their terrible crimes.

“We would like again to praise [the victim] for [her] courage in coming forward and enabling these men to be put before the courts. We hope that today’s sentences will give [her] some closure and help her rebuilding [her life].” 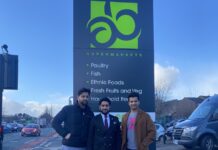 Businesses get together with local MP for Keighley BID networking event

Moghuls – On the Rocks