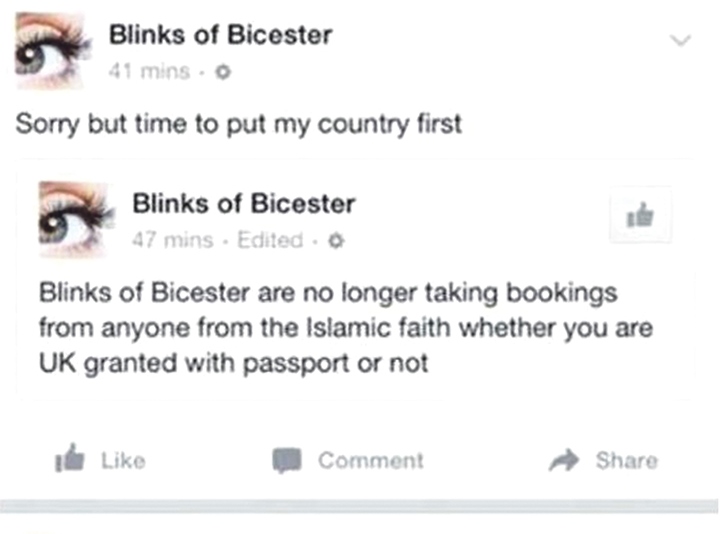 In the wake of the terrorist attacks in Paris, a woman in Bicester, Oxford was arrested for racially abusive comments against Muslims.

Her comments were posted on the Facebook page of the Oxfordshire beauty salon, Blinks of Bicester.

One supplier has stopped doing business with the company.

The post said that the business would not be taking any more bookings from people of “Islamic faith”.

“I have been inundated with messages tonight as I said I would not book any muslin or Islamic client. I stand by that completely as a UK citizen,” read a rebuttal post.

Thames Valley Police said they moved in after receiving complaints about “malicious comments” on the Facebook page.

They arrested a 43-year-old woman under section 19 and the Public Order Act on suspicion of displaying written material which is threatening, abusive or insulting with the intention of stirring up racial hatred, and for producing malicious communications.

The beauty supply line, Nouveau, said that the woman was not a franchisee nor an employee.

“We will be terminating any future supply of our products to this independent business with immediate effect,” the company said in a statement published on its website.

“We [Nouveau Lashes, Nouveau Beauty Group, Nouveau Contour and Nouveau Skin Therapy] abhor racism and completely reject the views of this individual and the messages posted publicly on her salon page,” it added.

The woman was released on police bail.