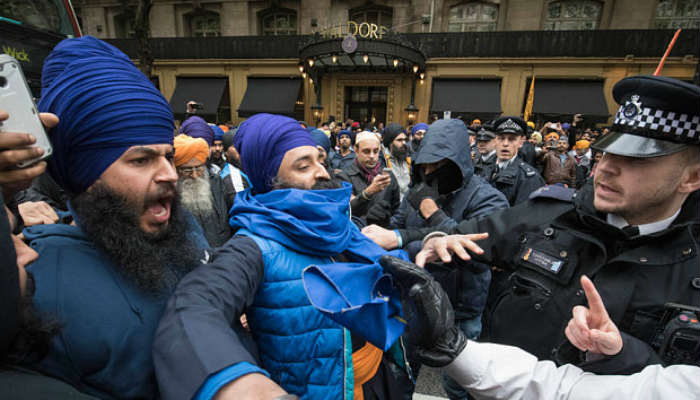 Hundreds of Sikh demonstrators gathered outside the Indian High Commission in central London on Thursday 22nd October to protest in solidarity with Sikhs in Punjab.

There have been 20 arrests, the majority of which have been for affray.

The protest ‘Sikh Lives Matter’ in London, which has sought to raise awareness of alleged police brutality in India, began peacefully. Demonstrators causing “significant disruptions” in central London after blocking the roadway at Aldwych, the Metropolitan Police said in a statement.

Additional police officers, including personnel on horseback, attended the scene when a small number of protests became violent, the statement continued.

A policeman has suffered a head injury after an initially peaceful Sikh Lives Matter protest was marred by what officers described as a violent minority.

“Whilst it was initially a peaceful protest the demonstrators blocked the roadway… and caused significant disruption to the central London road network,” a Scotland Yard spokesman said.

“Police liaison officers attempted to negotiate with those present, in order to facilitate peaceful protest and minimise the disruption to the public.

“A small group of protesters became violent towards police.

“During an altercation, one officer suffered a head injury and was taken to hospital.

“At this stage police believe a number of offences may have been committed.

Sikhs in the northern Indian state have staged demonstrations and blockaded roads in several towns and cities, after a torn copy of the Sri Guru Granth Sahib holy book was discovered in the village of Bargari in the Faridkot district. Clashes erupted between Sikh community protestors and police.

Tensions escalated when police officers opened fire during a protest in the nearby village of Behbal Kalan. Police said they had shot into the air, but two protesters were killed and dozens more were wounded – exacerbating the situation.

A violent clash between the police and protesters at Buttar Kalan village in Moga district also left 19 people injured. Nearly 200 protestors belonging to the Sikh community were also arrested by policemen, who were later released.