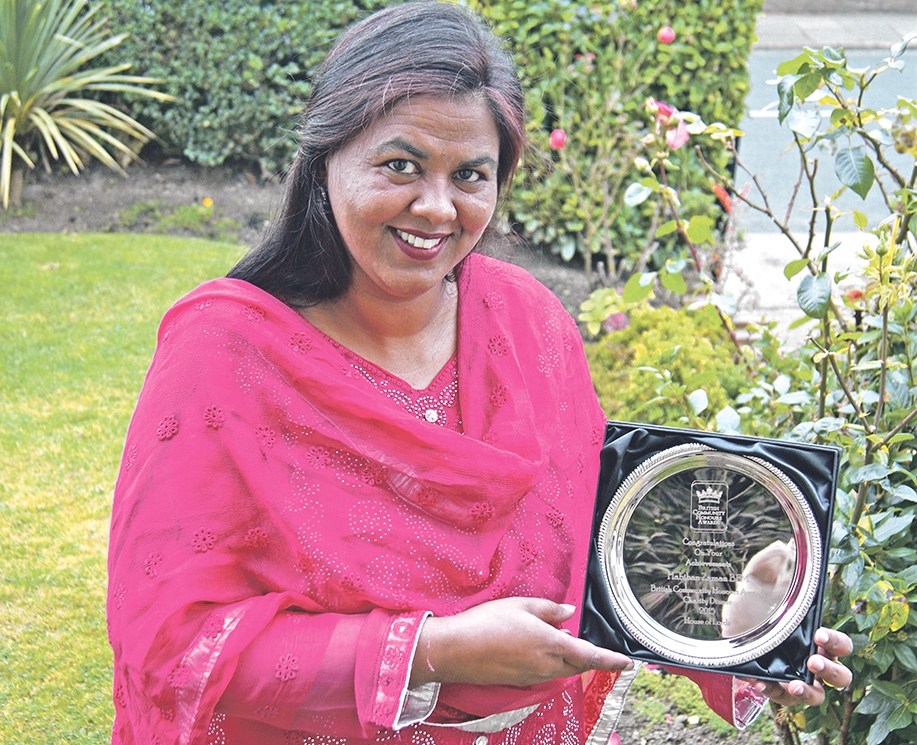 Kirklees engagement officer heads to the capital for prestigious award

A tireless volunteer from Kirklees has become the first person in the region to be awarded a prestigious British Community Award following a glamorous ceremony at the House of Lords.

Mother-of-two, Habiban Zaman, from Batley Carr, headed down to the capital earlier this month to receive her award for her work regarding integration and cohesion in the community.

Currently working as an engagement officer for Kirklees Council, the 49-year-old has been working with different community and women’s groups voluntarily for over 25 years.

Establishing her own support groups and working with organisations across the region,

On Friday 9th October, she received her coveted British Community Honours Award from Princess Katarina of Yugoslavia and Serbia.

Speaking after the ‘exhausting day’ she said: “It was an amazing day which was made all the more special because it was inside the House of Lords.

“When I started volunteering I couldn’t have even imagined being in this kind of situation so it is a huge honour for myself and my family.

“Helping women and young people in these diverse communities has become a real passion of mine and it is more than just a job with the council. It is something I really enjoy doing.

“The whole day in London went so fast because it was so enjoyable and it meant a lot to me to have my family there for support.”

The British Community Honours Award is not the only title Habiban has received in recent years, with the community stalwart given the British Empire Medal during the Queen’s Birthday Honours in 2014.

Having helped thousands of women across the region, she says awards like these only make her more determined to continue, even if they are not the reason she carries out the work she does.

“I started volunteering in the local community around 27 years ago and have always worked from my heart,” she said.

“Looking back on my career so far it is very pleasing to see how far we have come as a community since I began.

“Today, people from all backgrounds, from mosque leaders to individuals on the street, trust me because they know that I only want what is best for this community and its people.

“I think I have changed perceptions through my work and am determined to continue doing so. Perhaps that is what I am most proud of.”

The British Community Honours Awards are a registered charity working to improve the welfare and inclusion of minority communities in mainstream British society, recognising individuals contributions to the cause.

Stop the green ribbon getting cut in half!