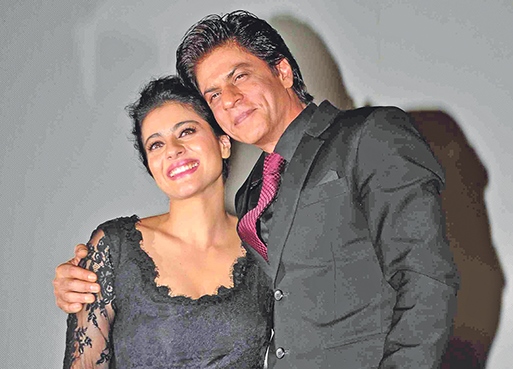 Shah Rukh Khan had Kajol back in his arms once again on the 20th anniversary of the iconic film, ‘Dilwale Dulhania Le Jayenge’.
On Monday 19th October, when ‘Dilwale Dulhania Le Jayenge’ or DDLJ, as it’s fondly referred to as, marked 20 years of its release, Shah Rukh Khan and Kajol celebrated by revisiting and recreating the film’s famous poster.

There is something about Shah Rukh Khan starrer ‘Dilwale Dulhania Le Jayenge’ that makes the romantic hearts beat faster even after two decades since it hit the big screen. Neither the fans, nor the stars, who were associated with the cult classic, can get over how the movie has been weaving magic since 1995.

SRK and Kajol have been shooting lately for Rohit Shetty’s directorial ‘Dilwale’, that brings them together after almost five years. They had shared screen space last in 2012’s release ‘My Name Is Khan’, directed by Karan Johar.

SRK obliged his fans and followers by taking to Twitter and posting a picture wherein he can be seen “picking Kajol again” in his arms. Apparently, Team Rohit Shetty and Red Chillies, with whose help they did the new picture were really happy with the outcome.