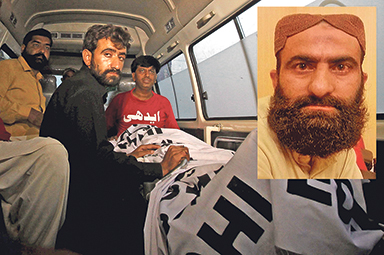 “Hussain, just a few hours before he faced the scaffold, had continued to protest his innocence”


Pakistan has been criticised for the execution of a man convicted of killing a child, despite a storm of protests from rights groups that his confession had been extracted by torture and he was a minor at the time of the crime.

Shafqat Hussain was hanged shortly before dawn at a jail in Karachi on 4th August, for killing a seven-year-old boy in the city in 2004.

The case raised grave international concern, drawing protests from the United Nations, as his lawyers and family said he was only 15 at the time of the killing and was tortured into making a false confession.

The United Nations rights experts said Hussain’s trial ‘fell short of international standards’ and urged Pakistan not to hang him without investigating the torture claims, as well as his age.

Hussain, just a few hours before he faced the scaffold, had continued to protest his innocence.

In Muzaffarabad, the main town of the Pakistani administered part of Kashmir, his family was distraught.

“Why did they hang my innocent brother, only because we were poor?” said his sister Sumaira Bibi, beating her chest and weeping.

His mother Makhni Begum, looked glassy-eyed, stunned by the news of the execution after seeing her son reprieved from the gallows four times since January.

“My son was innocent, only Allah will prove his innocence in his court,” she said.

“We can’t do anything but they (executioners) will face Allah on the day of judgement.”

Zaman – brother of Hussain, said his brother’s last words to him were: “I never even touched the boy – I want to let the world know this as I lay down my life.”

After receiving the body, another of Hussain’s brothers claimed the hanging had not been carried out properly, saying ‘half of his neck is separated from his body’.

The Kashmir government made a last-minute plea to President Mamnoon Hussain late on Monday 3rd August to postpone the execution, but to no avail.

Hussain was originally due to face the gallows in January but won four stays of execution as his lawyers fought to prove he was under 18 at the time of the offence and could therefore not be executed under Pakistani law.

An official probe into his age ruled he was an adult at the time of his conviction -though the results have not been published officially.

British anti-death penalty campaign group Reprieve said the hanging represented ‘all that is wrong with Pakistan’s race to the gallows’, while Amnesty International accused the government of ‘callous indifference’ to human life.

Pakistan has hanged around 180 convicts since ending a six-year moratorium on executions in December after Taliban militants massacred more than 150 people at a school, most of them children.

Hangings were paused during the Islamic holy month of Ramadan but resumed last week.

The European Union last week voiced serious concerns about the ‘alarming pace’ of executions, warning that a prized trade status granted to Pakistan could be threatened if it breached international conventions on fair trials, child rights and preventing torture.

Hussain, the youngest of seven children from a remote village in Kashmir, was working as a watchman in Karachi in 2004 when a seven-year-old boy named Umair went missing from the neighbourhood.

A few days later Umair’s family received calls from Hussain’s mobile demanding a ransom of half a million rupees ($8,500 at the time), according to legal papers.

Hussain was arrested and admitted kidnapping and killing him, but later withdrew his confession, saying he had made it under duress.

His true age has proved difficult to ascertain – exact birth records are not always kept in Pakistan, particularly for people from poor families like Hussain’s.

A birth certificate circulated in the media several months ago, but it appeared to have been issued only in December and the government said there was no proof of its authenticity.

Amnesty International estimates that Pakistan has more than 8,000 prisoners on death row, most of whom have exhausted the appeals process.

Supporters argue that the death penalty is the only effective way to deal with the scourge of militancy in the country.
Critics say Pakistan’s legal system is unjust, with rampant police torture, poor representation for victims, and unfair trials.