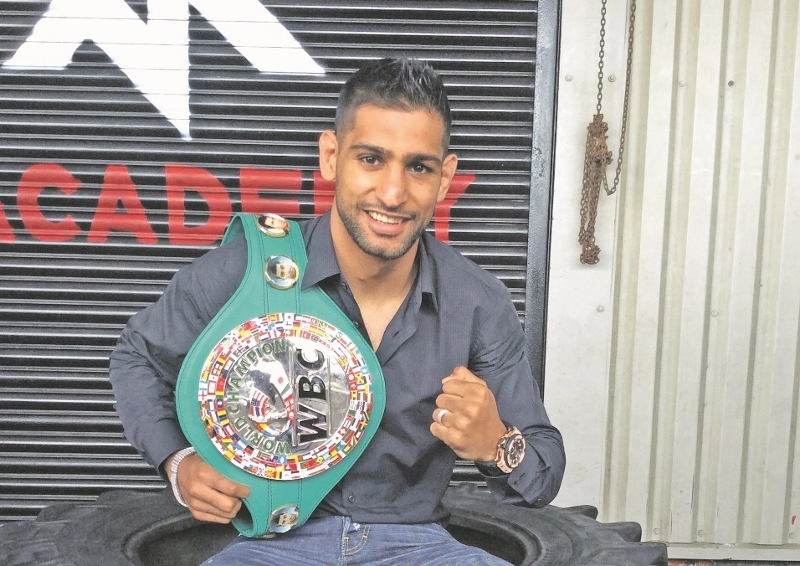 Amir ‘King’ Khan, fresh from his 12 rounds point victory over New Yorker Chris Algieri, has told Asian Express Sports Columnist, Rick Manners, Kell Brook is not even on his radar.

Ahead of a possible showdown with Floyd Mayweather Jnr, the Bolton boxer knew that a win in New York’s Barclays Centre last weekend would keep him in the running for the mega bout, however a loss would mean an end to the dream of fighting the world’s finest marquee fighter.  And yes Khan managed to claim victory on Friday 29th May.

Khan controlled the fight from start to finish and even though Algieri pushed Khan hard in the early rounds of the fight, achieving some successes by connecting  and catching  Khan with some great right hand power shots, Khan cleverly manoeuvred his way out of trouble to secure 115-113, 117-111, 117-111 for a comfortable and decisive points win.

Asian Express’ ‘Rick Manners’ caught up with Amir at his Bolton academy gym and asked him one simple question:

“WILL THE KELL BROOKE FIGHT EVER HAPPEN?”

RM: With reference to Eddie Hearn’s recent remarks on YouTube, what are your thoughts?

AK: Whatever people say they can say.  Obviously I have my own team and I’m my own boss.  I make decisions my way.  I’ve done it the hard way and I will keep doing it my way whatever people say.

RM: If the Mayweather fight falls through, would you fight Kell Brook this year at Millennium muted for October/November 2015?

AK:  No, no, no. May be next year?  I’m in an exciting division. We have big names there, the likes of Tim Bradley, Lamont Peterson, Keith Thurman, Danny Garcia, Manuel Marquez, Miguel Cotto.  I can pick and choose and still make lots of money.

RM:  What do you think when you hear Eddie Hearn and Kell Brook say you are scared of fighting Kell?

AK:  I’m not scared.  Never scared.  They want to mess around with Amir Khan, get me angry so they can get the fight made.  And the only time they make it in the media, is when they mention Amir Khan otherwise nobody knows Kell Brook.

RM: Amir I’ve got just one more question for you.  I’ve known you since the Paul McCloskey post fight press conference drama where it got quite heated with Eddie Hearn and his father Barry, way back in 2011.  There was a slight sense of disrespect and animosity between the two camps at the time, Matchroom and Khan Promotions.  As you know the situation now with Eddie Hearn and Kell Brook being on the internet saying all sorts of disrespectful stuff.  Do you think it will be the same sort of situation like Ricky Hatton and Junior Witter when they both got personal.  There was a lot of disrespect there.  In the end they, Junior and his team, wound Ricky up so much that Ricky said at the time “you know what Junior I’m not giving you the opportunity to fight me.  We are boxers and both deserve a degree of respect so you aint going to get this fight.”  Amir do you think we are going to end up with a situation like this between you and Kell Brook?

AK:  Yes it is going that way.  Like when Ricky Hatton had the arguments with Junior Witter.  They (Kell and Eddie) think they are giving the boxing fans what they want.  But they are doing it the wrong way.  They need to do it the professional way, the proper way.  That is why the fight is not going to happen.  They keep disrespecting and making it about me not wanting to fight and taking it personally and stuff. They need to let it happen itself naturally without forcing it.

The way I see it is, Kell Brook really wants the fight because he knows it is going to be the biggest pay day of his career.  Also for him to get that pay day,  he needs to make it happen before he gets beat by somebody else, a decent fighter.  I don’t think he wants to fight anyone in the top ten who is going to be dangerous.   Because he knows he’s going to get beat but he doesn’t mind getting beat by me because he knows there’s going to be big big money that comes with it.  Look at it as a business move and it is a very smart business move that Kell and his team would be making because they know it is going to generate millions.  The thing is for me it’s gone past the money side or titles stage, it is all about building a legacy for me and having the big fights I want.