Automobili Lamborghini has presented the new Lamborghini Huracán GT3, in a world premiere at its headquarters in Sant’Agata Bolognese.

The GT3 competitor makes its debut following that of the new Huracán LP 620-2 Super Trofeo, which will be the protagonist of the Lamborghini Blancpain Super Trofeo in Europe, Asia and North America from this year.

Starting in 2015, the Huracán GT3 will line up in the Blancpain Endurance Series that runs over five venues in Europe, among which is included the famous Spa-Francorchamps 24-hours race.

The growth and success of Lamborghini motorsports activities throughout the world has heightened its appeal.

Equipped with an Alu-Carbon chassis and a fully integrated FIA-compliant roll-cage, the subframe has been modified both at the front and rear to accommodate a high performance water radiator (front), and for a better positioning of the gearbox (rear), improving aerodynamics. The kerb weight is 1239 kg with a 42/58 front/rear weight distribution.

The bodywork is in composite materials and aerodynamics have been tuned to grant the best possible air flow penetration, and maximum adherence and traction in any condition on any asphalt.

Efficiency has been improved thanks to the rear adjustable wing, adjustable front diffuser and louvres. The new aerodynamics also allow improved cooling of the braking system.

As for the Huracán Super Trofeo, the GT3 is equipped with new bodywork fast- fittings and equipped with a new, enhanced-performing engine and gearbox oil cooler.

Special attention has been given to safety, with the new Lamborghini Huracán GT3 equipped with a carbon frame seat, a fire extinguishing system and an innovative roof hatch which enables, in case of need, quick assistance by medical personnel through the roof of the car.

The braking system is made up by 380 x 34 mm steel discs at the front (6 pot), and 355 x 32mm steel discs at the back (4 pot), according to FIA regulations, equipped with Bosch ABS. This system features 12 different settings that can be actioned directly from the steering wheel, as can traction control. 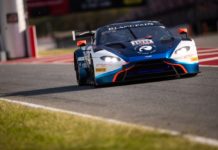