Arguably, two of the newest hardest rappers have now teamed up with the acclaimed DJ Surinder Rattan (The Lick, OMG, Has Has & many more) to give us a mind-blowing track.

Taken from TaZzZ’s forthcoming mixtape TaZzZMania 2, ‘Shutdown’ is the brand new single that is sure to set the tone for an exciting 2014.

London-based producer TaZzZ and his protégé, Immi, from Leeds, both lace the high-octane musical soundscape with clever punch lines and lyrical supremacy.

TaZzZ, who has been steadily building up his team since 2007, has been immensely encouraged by his growing fan-base. He launched Leeds lad Immi last year with ‘Jhoom’ which was a fresh new mind-twisting entry into this genre of music.

With a passion for delivering ‘East meets West’ vibes, TaZzZ has cracked it once again in unleashing a raw, gritty and modern sensation for the ears with ‘Shutdown’. 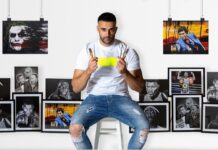