A Bradford Primary school has been put on high alert after a pupil was approached by an Asian man at the school gates.

For the second time in less than four months, Cavendish Primary School, on Hall Road, Eccleshill, has been at the centre of a ‘stranger danger’ case as a nine-year-old was reportedly targeted by an unknown man.

The school has sent out cautionary texts to all parents in regard to the case urging them to be vigilant and careful with their children, whilst police have begun an investigation into the report.

The boy told teachers he was concerned by the man, who he had never seen before, after getting dropped off by his mother at the school gates.

Describing him as Asian, in his mid 30s and balding, teachers immediately checked CCTV for footage of the culprit and informed police immediately, who then commenced a search of the area.

It is not the first time the school has been involved with an apparent abduction case.

In October 2013, a similar case was seen at the school gates when a 61-year-old man was arrested and bailed after grabbing the wrist of a three-year-old girl as she walked with her mother.

That time the suspect was also alleged to have spoken inappropriately to the girl before fleeing. Police had stressed it was an isolated incident and urged parents not to worry.

Neighbourhood policing team officers will now be patrolling the area at start and end of the school day whilst the investigation continues. 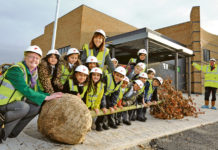