Cheeky Chaz Singh, 41, created this hilarious photo by drawing a letter T on a sheet of paper then holding it up outside the store’s frontage.

The official was out shopping with his wife Sarah Kaur, 42, in Exeter, Devon, when he spotted the comical photo opportunity.

He posted the snap on Twitter where it has been re-tweeted thousands of times.

Mr Singh, who is councillor for Plymouth’s Drake Ward, said: “I just had one of those Eureka moments.

“I went into the store, asked for a pen and some paper and started to draw the T out.

“People were chuckling as they walked past. One guy realised what we were doing and said it was just amazing.

“My daughter called me up to say the picture has gone viral.

“One guy who wears a turban tweeted it in Scotland and he contacted me to say people have been coming up to him asking if he knew me.”

Mr Singh previously posed beside an Urban Splash sign at Royal William in Plymouth, making the T shape with his arms to make it read “Turban Splash”.

He added: “It’s a bit of fun, but it’s also about being proud of who you are. This has taken the whole concept of the turban and humanised it.” 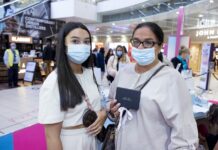