Cakes and buns have never tasted so sweet for a local school pupil whose magic baking skills have helped raise more than £100 for charity.

Hadeeqah Akhtar, from Bradford Girls’ Grammar School, raised the fantastic sum of money in support of the Philippines following the disaster caused by Typhoon Haiyan.

Millions were left homeless, with more than 5,000 people dying as a result of the devastating winds which reached up to 235mph in certain parts of the islands.

11-year-old Hadeeqah first heard about the crisis during a school assembly and was so moved on the subject that she took it upon herself to start her own fundraising campaign to help in whatever way she could.

The young baker decided to make cakes in her own time and sell them at school, as well as at her parent’s café to raise money for Shelterbox, an international charity that raises funds for families made homeless by natural disasters.

Using her baking talents to make an assortment of small cakes and buns, as well as her IT skills to design campaign posters, the young fundraiser enlisted the help of school friends and family to raise over £100.

Customers to her parent’s café, the Café Patisserie, were particularly interested to learn about the campaign and delighted to make donations towards the cause.

Hadeeqah’s mother, Mrs Shagufta Shaheen, said she was extremely proud of her daughter’s efforts and hoped that the funds would help play a role in helping some of the most vulnerable in the South Asian country.

“At this special time of year, when everyone is thinking about family and friends, it is so wonderful that Hadeeqah has chosen to help others that are less fortunate,” she said.

“All of her family and friends are extremely proud of her.” 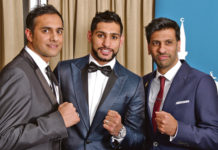