Education Secretary Michael Gove has insisted that university leaders must withdraw guidance which endorses the segregation of men and women in debates and lectures featuring Islamic speakers.

Mr Gove said the guidance issued by Universities UK (UUK) was ‘pandering to extremism’ and insisted that speakers who demand separate seating for men and women in their audience should not be indulged by the authorities.

UUK chief executive Nicola Dandridge defended the policy yesterday, insisting that gender segregation was not ‘alien to our culture’.

Ms Dandridge insisted that institutions would not enforce segregation but if participants were happy to sit in separate groups that would be permitted as long as there was no disadvantage.

But Mr Gove told the Daily Mail: “We should not pander to extremism. Speakers who insist on segregating audiences should not be indulged by educators.

“This guidance is wrong and harmful. Universities UK should withdraw it immediately.”
The row over segregation has sparked protests from students, and shadow business Secretary Chuka Umunna said he was ‘horrified’ by Universities UK’s position.

Last month a UUK report stated that university officials must consider both freedom of speech obligations and discrimination and equality laws when considering a request from a speaker for segregated audiences.

It said that if officials decide to proceed with an event with segregation, they must consider whether a seating plan would be discriminatory to one gender.

But it went on to say that if side-by-side seating was enforced without offering an alternative non-segregated seating area, it could be deemed as discriminatory against men or women who hold feminist beliefs.

Ms Dandridge said: “We are not talking about universities enforcing segregation… In practice, if the people coming to this event said ‘We do not want to segregate and separate out men and women’, it is inconceivable that the university would impose it on them.

“What we are talking about in practice is voluntary segregation and that’s what happens in practice if people participating choose.”

Rejecting comparisons to racial segregation, she said: “It is possible for women to choose to be educated in an all-women environment. It’s not something which is so alien to our culture that it has to be regarded like race segregation, which is totally different and it’s unlawful, and there’s no doubt about that whatsoever.” 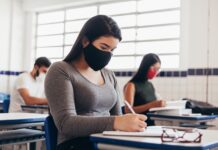