A local Bradford primary school has been praised for its ‘sharp improvement in pupil’s achievement’ following the latest Ofsted report.

St Matthews CE primary school, was commended by inspectors who once again awarded the school a rating of ‘Good’ for the second assessment in a row.

The inspection team found that the overall effectiveness, achievement of pupils, quality of teaching, behaviour and safety of pupils and leadership and management were all good. Special praise was given to the headteacher Bob Curran, for taking ‘decisive steps to improve teaching, particularly in mathematics’.

Mr Curran took over as headteacher in January 2011 and implemented a number of changes at the school with the results hugely positive.

In terms of the progression of children, the school moved from the lowest 30 per cent in the country in 2011, to the top 15 per cent this year.

In maths in particular, the school was previously in the bottom quarter of schools in the country, yet now, St Matthews is proud to boast itself in the top 12 per cent nationwide.

Speaking after receiving the award, Mr Curran praised all the staff and pupils for their hard work over the past three years and explained his delight at being awarded yet another ‘Good’ Ofsted result.

“It has been absolutely fantastic here,” he said. “I am thankful to be able to work with some great adults but working with the children in particular is such a privilege and they are always able to make my day better.

“When the Ofsted officials payed us a visit we were confident to be honest because we have put in a lot of hard work for the past three years. Thankfully Ofsted noticed this and supported our judgement that we are a very good school.

“Our challenge now is to try and keep it that way. We now have two ‘Good’ inspections in a row despite a different framework and Ofsted have said we have continued to raise the bar.”

He added: “It is like an endorsement of everybody’s hard work and then of course there is always that small sense of relief.” The two-form entry educational establishment currently has 500 pupils from reception through to Year 6 and is proud to be a community school. All faiths and religions are represented by the student body who, between them, helped raise more them £3,500 for charities in the last academic year.

Events are commonly held at the school, including evening classes, such as mathematics, ICT and CV building, for people of all ages, as well as extracurricular activities. 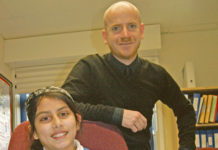